NOTE: A Special Thanks to Elijah Collins (ABC/FOX Montana Sports Reporter) for providing the video.

During the process of putting down new ice officials at the Ice Plex started to notice a few leaks and now they’re forced to do a whole new repair that could take a couple of weeks.

The Great Falls Ice Plex transformed into a construction zone with pipes exposed to make sure no leaks are left behind.

This is the first time Facility Manager Chris Mayer has seen an issue like this and he says there’s still a lot of questions that need to be answered.

“I’m not sure exactly why it happens. We’ve been in contact with some of the biggest names in ice rinks in the United States getting some help to get through this to get an idea of what we’re doing, what we need to be doing, or what we could do if there are any preventative measures so that we don’t have any more of a problem,” said Mayers.

In the meantime, the Great Falls Americans are traveling to Helena to practice and the players are making the most of an unfortunate situation.

“It was upsetting for sure but we’re making the best with what we can and having a good time. It’s a good bonding team experience for sure,” said Garrett Weisenburger.

The Americans opened up their season last week on the road but it’s only a matter of time before they’re back on their own stomping grounds. 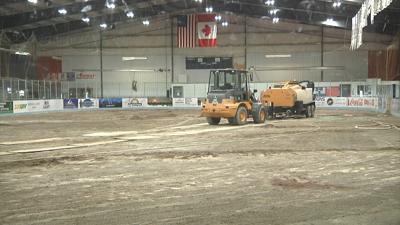 If no more leaks are found, new dirt will be brought in and leveled out and by October 1st Mayers hopes to have all repairs complete.