NOTE: A Special Thanks to Afiq Hisham(ABC/FOX MontanaReporter) for providing the photos and video (in story link at bottom).

CASCADE COUNTY – For 12 years, the Great Falls Ice Plex has been home to countless hockey practice and ice skating sessions. Now they aim on expanding, with the launch of a new capital campaign. 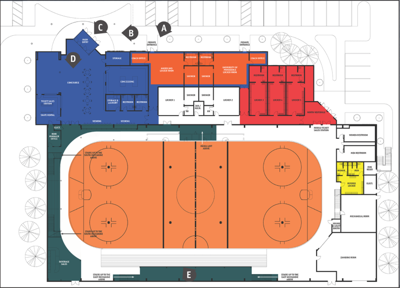 The Great Falls Community Ice Foundation (GFCIF) laid out planned renovations across six phases in Friday’s Ignite event, building upon each improvement over time without closing their doors.

“All of these improvements are going to be phased to allow fundraising and continuity of operations in the ice plex,” said GFCIF Secretary Ryan Smith during the announcement.

The first phase looks at building three new permanent locker rooms with showers and restrooms, their first move towards replacing unheated ones built over a decade ago. ”They were meant to be temporary. They do not meet sanctioned standards for most hockey tournaments or figure skating tournaments, and what we need is at least five locker rooms for rink operations,” said Smith.

FCIF estimates this to cost $575,000, laying the groundwork for future upgrades.

Future steps will focus on a mezzanine floor, more dedicated locker rooms for teams and referees, as well as a reinforced concrete slab that opens the floor for other event types.

“This new concrete slab will allow the ice plex to become a versatile activity center that can host events in off-ice seasons such as concerts, trade shows, that sort of large venue,” said Smith. He goes on saying the slab also quickens the process around creating ice sheets, while lowering long-term maintenance costs.

However, GFCIF says fundraising and donations are paramount in making this plan a reality in the coming years. If you’d like, you can donate through the ice plex’s official donation page.