The NA3HL gives out a monthly “Player of the Month” award each month of the regular season. The awards, presented by Bauer Hockey and Vaughn, are given to the top performing players in each of the three positions (Forward, Defenseman, Goaltender) of the North American 3 Hockey League that are nominated by their respective teams.

For the month of November 2019 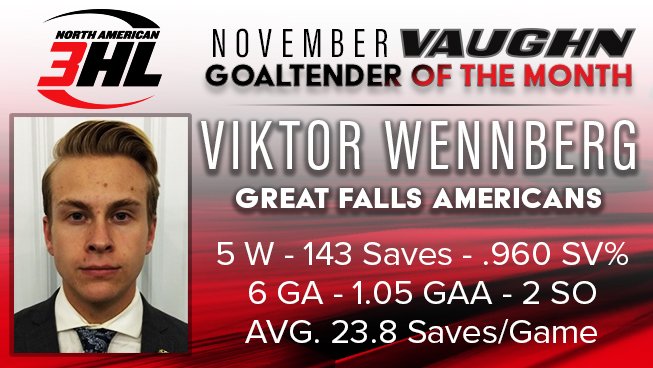 Wennberg’s stellar season continued in November, where the net minder went 5-0-1 in his six appearances with a .960 save percentage and stingy 1.05 GAA to go with a pair of shutouts. After beginning the month with four straight wins to stretch his streak at the time to eight W’s in a row, Wennberg posted a .906 or higher in each contest en route to stopping 143 of 149 pucks in the month of November. Wennberg made at least 20 saves in each of the five games he started, and only allowed more than one goal in one game against the high-scoring Sheridan Hawks. Wennberg now boasts a .951 save percentage and 1.36 GAA on the year.